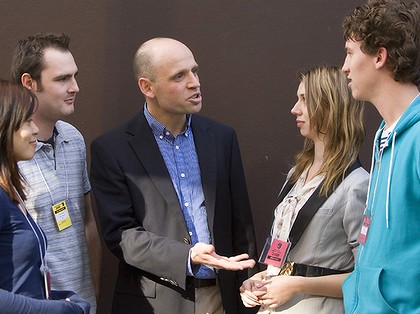 So the federal government thinks that young people should be “realistic”, “adaptive” and “practical” when looking for a job, rather than pursuing their dreams and finding a job that they really love (and one that makes a real difference!).

According to Kevin Rudd, “It is important for all of us to be practical in terms of the jobs that are available in the economy.”

And Mark Arbib – Employment Services Minister – doesn’t think young people should pursue their dream jobs either, and instead look for “other options”:

In tough economic times many people, especially new entrants to the job market with limited experience, have to adjust their thinking and be more adaptive and flexible.

Well, here at EthicalJobs.com.au we can only respond with that old anarchist slogan: “be reasonable – demand the impossible!”.

Why should young people have to be realistic?  As research is increasingly showing, more and more people are actually being more idealistic, and demanding jobs that make a difference to the world.  If Kevin Rudd and his government had any foresight at all, they’d see the trend and start investing in an economy that would produce the jobs we all want.

We can imagine an economy where all the jobs are “dream jobs”.  An economy where instead of handing almost $20 billion to the most polluting companies (as the Rudd government is proposing to do), the government instead invested that cash in green, renewable energy technologies, energy efficiency programs, organic agriculture, sustainable public housing and much-needed community enterprises.  Such an investment would create hundreds of thousands of green and community jobs.  No need to be “realistic” about job prospects then.

Why not tell Kevin Rudd what you think of his request to “be practical” when looking for work?  You can email him right now by clicking here.