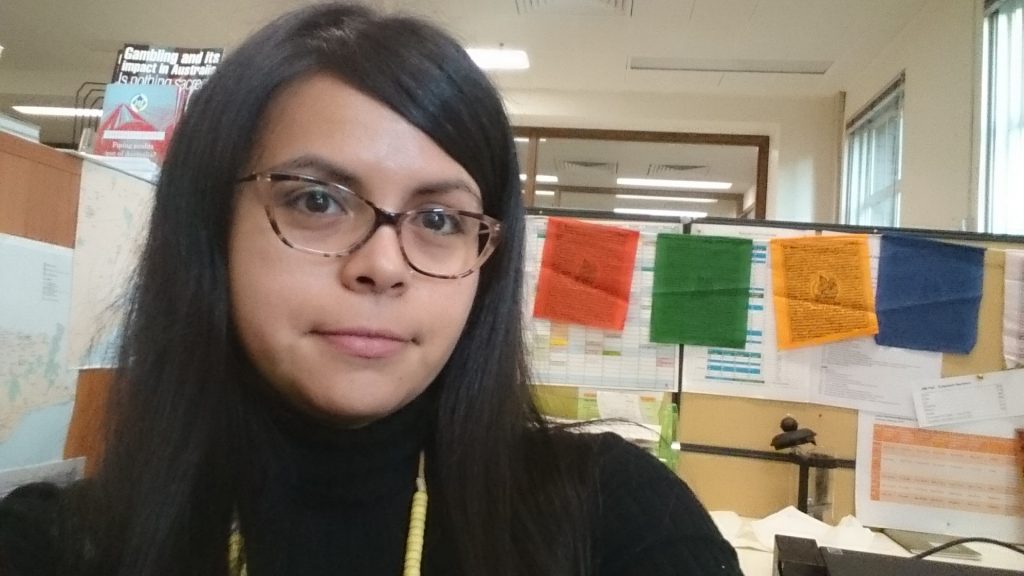 People find amazing jobs on EthicalJobs.com.au every day. This is part of a series of blog posts that go behind the scenes to meet some of the people and organisations finding each other through EthicalJobs.com.au.

Today’s story is from Denisse Sandoval. She found her role as the Social Justice Officer at the Uniting Church in Australia’s Justice and International Mission Unit, which works to engage and educate church members about social justice issues, on EthicalJobs.com.au.

Congratulations on finding your job on EthicalJobs.com.au, Denisse! First of all, can you tell us about your first ever paid job?

My first paid job was working for my father as a landscaper in our hometown of Brentwood, New York. I was 14 years old, and I had to pull weeds out from people’s front yards and load the rubbish bin with all the grass clippings.

After that I worked at McDonald’s for two weeks, which I hated!

Tell us a bit about your education – has it had a significant impact on your career so far?

I studied development sociology at Cornell University where I learned about poverty and theories behind why there is so much inequality – even in rich developed countries. This education definitely impacted my view on world events and politics; however, growing up in the working-class immigrant community of Brentwood had already shaped my views on issues of race and inequality.

Later, I undertook a master degree at Melbourne’s RMIT in international development. There, I learned more about why there is poverty but also what can be done to alleviate it through programs run by NGOs.

Eventually, this led me down the path of becoming a community organiser, where I get to be political and collaborate with others to achieve social justice goals.

So what about your career before you started at Uniting Church?

I’ve worked as a community organiser running an alliance on Long Island in New York. This was an alliance between churches, community groups and trade unions.

I also worked as a community organiser coordinating issue-based campaigns at the Long Island Progressive Coalition. I got to speak to people one-on-one about education and healthcare and how we could make it better for all people.

Here in Melbourne, I’ve worked at a union, United Voice, organising alongside cleaners in the CBD for better working conditions.

And have you always wanted to work in social justice?

Not really – I had to go through a process of discovering what I liked to do in terms of paid work, and also what my values truly are.

I tried casual relief teaching at the high school I attended as a kid, and also youth work with at-risk young people, but both of those jobs were missing the political aspect I was hungry for.

I worked for a 501(c)(4) [a tax-exempt social welfare organisation] in the US, which did some political campaign work for the Democrats, but I found that this type of work also wasn’t the right fit either. I needed to be at the grassroots level encouraging people to stir things up a bit, preferably outside of a political party.

My inspiration to work in social justice simply comes from my feeling that the system we live in is not fair, and if I don’t do anything about it then I’m not doing a good job with my life.

That’s very inspiring! Can you tell us about what you do as the Social Justice Officer at Uniting Church – what does that entail?

I undertake some campaign work and also some organising work. I encourage Uniting Church members to participate in campaigns, such as the Tax Justice Network campaign for tax fairness and the Makes Lives Better campaign for appropriate funding of social services.

Together with church members, we lobby politicians, write letters, hold meetings on the issue, make phone calls and basically apply pressure until we get a socially-just outcome.

I also offer congregations community organising training for their context at church. This is for congregations that want to engage more with local community issues and take some local action.

People of faith can be fantastic to work with and I enjoy my work very much.

How did you first come across EthicalJobs.com.au?

I found it way back in 2010 when I was undertaking my masters degree, and my fellow students and I were all looking for ethical jobs at either an NGO or a community-based organisation. I think I was on the website three times a week or more just in case I missed something!

And what first attracted you to work with the Uniting Church when you saw the ad on EthicalJobs.com.au?

Besides being a place of worship, the Uniting Church also looks after Uniting Care, and the unit I work in looks after social justice campaigning.

When I first saw the job description on EthicalJobs.com.au, I literally jumped up and down in front of the computer and said to my partner, “I want that job!” The position description said that this lucky person would assist church members in taking part in social justice campaigns and mobilise supporters to be active.

It also said that the Uniting Church in Australia stands in the Christian tradition, which recognises its obligation within a participatory democracy to work towards a socially just society, and speaks out against injustice whilst working with other NGOs and faith-based organisations. I loved the sound of that and have found it to be true.

What’s in store for the Church’s Justice and International Mission Unit in the coming year?

We’ll continue collaborating with the Tax Justice Network, and I will be working on a human trafficking campaign with the aim of making it illegal to sell products in Australia made with slave labour, forced labour or trafficked labour.

My colleagues in the unit will continue working on the issues of climate change and the plight of people seeking asylum – issues that are of major importance to the Uniting Church community.

And finally, what advice would you give to the many ethical jobseekers who dream of a landing a job like yours?

My humble advice is to hang in there and volunteer.

Two places I volunteered at helped me to land the interview at my current job: the Asylum Seeker Welcome Centre and Melbourne Campaigners Network. Through volunteering, I got to meet people who work in the field I wanted to be in, and I felt like my skills weren’t rusting.

Also, don’t be afraid to ask people for a coffee meeting so that you can ask them all about their role – you never know who they know, and often people can be very helpful.

Thanks for your time, Denisse!