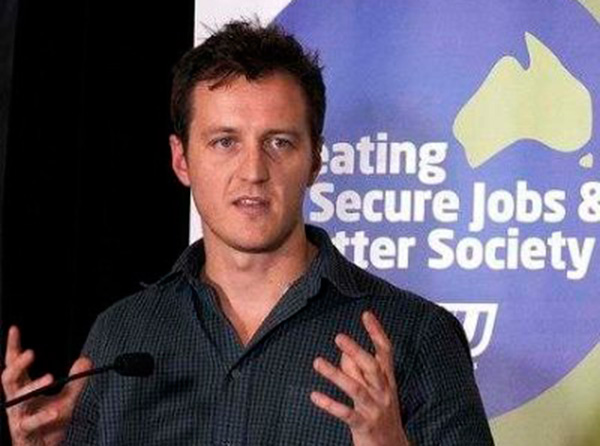 People find amazing jobs on EthicalJobs.com.au every day. This is part of a series of blog posts that go behind the scenes to meet some of the people and organisations finding each other through EthicalJobs.com.au.

Hi Joel – thanks for chatting to us! To start us off, can you tell us about your first ever paid job?

My first ever paid job was an afternoon paper run when I was 12. I would run to the newsagent after school a few days a week and drag the tin trolley through the streets – I thought it was pretty cool to have a job. I had gained the financial independence to buy lollies from the school canteen and haven’t looked back since.

Tell us about your education – there aren’t many uni or TAFE courses in advocacy, so what did you study?

My career has been different to my university study. To me, the progression makes a lot of sense, but I regularly find myself having to explain that to people.

My starting point was a degree in music education at the Sydney Conservatorium of Music, though a couple of years in I realised a career as a teacher wasn’t really for me. After finishing the degree I went into youth work, for similar reasons that motivated me to get in to teaching, and I’ve been in the community sector since.

I maintain huge respect for the role that teachers play in young people’s lives, and the difficult and complex job that they do. It also turned out that an education degree is a wonderful preparation for youth work and the other community work that I’ve done.

What about the rest of your career before starting at the Benevolent Society?

Outside of my career I’ve been involved in community activism and volunteering, which over time came to include involvement in a political party and campaigning. Over time, that came together with my paid work, both through broadening my work from community development and service provision to advocacy and campaigning, and by informing my understanding of the political role that community organisations play.

The role I enjoyed the most was as campaign manager for the Australians for Affordable Housing campaign in the lead up to the 2013 federal election. This was my first out-and-out campaigning job, and I walked into a campaign that was well planned, appropriately resourced and had strong commitment from a coalition of community sector organisations.

You quickly learn the importance of each of these! I benefitted greatly from the advice of the sector leaders involved in that campaign, and the trust that they showed me.

Now the crucial question: what does an Advocacy Campaigner do?

As an advocacy campaigner, my role builds on the various organising, communications and community development experience I have.

The main part of my job is identifying communities that are strategically and politically important for a campaign – like our current “Fix Pension Poverty” one – then pulling together organisations and key individuals in those communities who might be interested in our campaign goals.

If they’re motivated to get involved, we work to make sure they have the resources and support to build the campaign in their local area.

When the campaign is more progressed, this will mean working with these communities on local campaign actions to influence the various politicians that represent them, or hope to represent them in the future.

This, of course, needs to be supported by knowledge of the policy areas that we’re getting involved in, and maintaining good relationships with the experts in those fields.

How did you first come across EthicalJobs.com.au?

I couldn’t tell you how I first came across EthicalJobs.com.au, because I’ve been using it  – to both search and to advertise – since not long after it started up. It’s inevitable in the sector I work in, and the jobs that I’m looking for, that job opportunities that I’m interested in almost always pop up on EthicalJobs.com.au. Thanks for being around!

So for those who may not be aware, what does the Benevolent Society do? And what first attracted you to it when you saw the ad on EthicalJobs.com.au?

It’s a very privileged position to work as a campaigner for an organisation that not only has the history of being Australia’s first charity, but along the way played a key role in the introduction of the age pension, campaigned for child labour laws and has had a key role in the development of maternal and children’s health, amongst many other achievements.

The Benevolent Society provides services and support to older Australians, children and families and people with a disability. Having worked in organisations that mainly undertake advocacy, or focus on community work and service provision, I’m enjoying the grounding of campaigning in an organisation that is more grounded amongst communities. It helps to speak with legitimacy and to keep our work grounded.

Many people who work for community organisations are well aware that they could earn a more lucrative salary in the public or private sector. What motivates you to work in the not-for-profit sector?

I’ve worked in local government and I’ve worked for a university, but both roles were focused on community work. To achieve the things that I want from my career, and to find the roles that will motivate me to keep fighting the good fight, the majority of these roles will be in not-for-profits. It hasn’t been a conscious decision, but it’s where my values have led me.

I have a huge belief in the role of community organisations contributing things to society that government or for-profit businesses can’t, and it’s been an honour to contribute to that both as a worker and as a volunteer over the years.

Just to finish, what advice would you give to the many ethical jobseekers who dream of a landing a job like yours?

I really believe that to develop the career you’re after, you have to develop your experience and strengthen your skills in new areas. I’ve done that by identifying where I need to develop, and seeking out jobs that will give me learning opportunities alongside meaningful work. It means sometimes moving sideways instead of up, but in the long run it leaves you with a broad skillset to help you get the jobs you want.