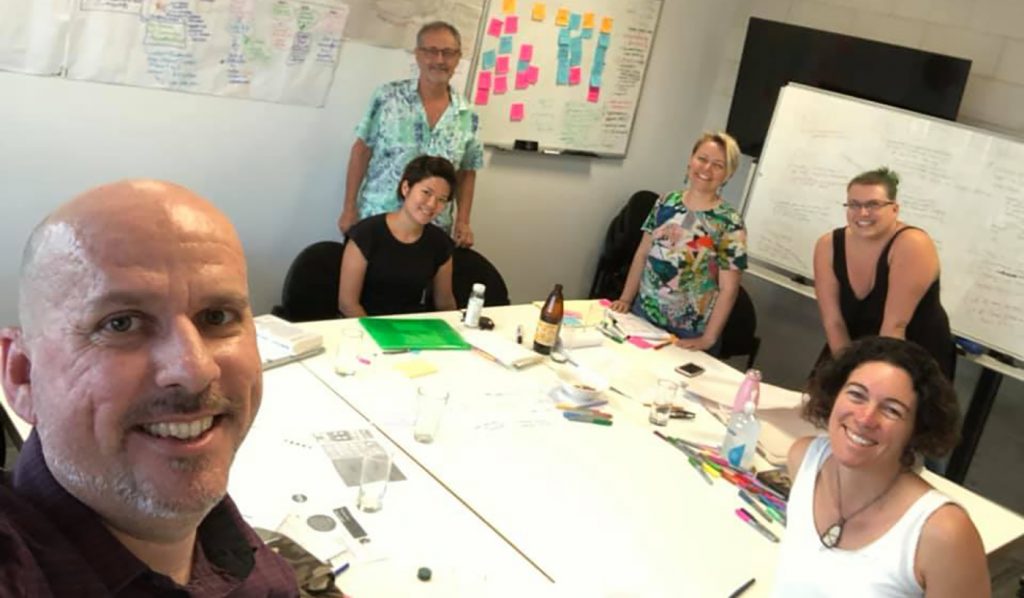 Today’s story is from Chris Mundy, who found his role as Sector Development Officer for Queensland Families and Communities Association on EthicalJobs.com.au.

Queensland Families and Communities Association works alongside local Neighbourhood and Community Centres to support and enhance their grass roots work.

My first job was selling lotto tickets, magazines and newspapers at a local news agency when I was 17 years old.  This gave me great insights into my local community as all the locals would come in for a chat about their life and the local area. You got to know the local characters that were often quirky and interesting. My boss was tough (ex-army) and made me work really hard!

I failed Year 12 as I found nothing that particularly interested me and I was frustrated with the system. In my mid 20’s, I began studying ministry at a theological college. I enjoyed the multidisciplinary nature of the course and began working as a Chaplain in a high school. It was here I developed my passion for community development and support. I went on to study a Graduate Diploma in Psychology and then a Research Masters in International and Community Development.

Following my 10 year stint as a Chaplain, I became a Community Development Worker in a local Neighbourhood Centre. This role gave me such a great opportunity to notice the power of the existing internal resources in local communities. I developed a Volunteer Program with over 250 community members, then started a No-Interest-Loans Microfinance program. I also worked on a men’s development program for the region. Following my work in a Neighbourhood Centre, I worked for Queensland’s Forced Adoption Support Service at Jigsaw Queensland.  This again gave me diverse experiences personally supporting people affected by adoption, family tracing, intermediary work, advocacy and supporting local peer support and stakeholder groups.

The QFCA Sector Development Officer role was funded from 2017 to begin building the work of Neighbourhood Centres at a macro level after the sector was impacted by significant funding cuts in 2012. I sometimes describe my role as a “Swiss Army Knife”, because it varies from web design and communications to research projects, data analysis and attending meetings with Government, Neighbourhood Centres and Human Services Peak Organisations. Whatever is needed in the sector, I adapt to respond to it and if I don’t have the capacity or skills, I find people who can.

Without a doubt, the most rewarding thing about my role is supporting the organisation to grow from one funded position in 2018 to become the largest it’s been in its history with now a General Manager, Disaster Project Worker, State Disaster Coordinator and Executive Officer.  We also designed a Performance and Reporting Framework this year so that the grass roots work of centres can be effectively evaluated and recognised.

The Sector Development Officer position came unexpectedly as despite my past employment in a Neighbourhood Centre, I hadn’t heard of the QFCA. I’d also been looking for jobs that supported International organisations. But I noticed the role had perfectly brought together my past experience, study, passion, interests and also the organisation aligned with my values.

I don’t get a sense of meaning or purpose when I do things for money. I’ve always wanted to make the world a better place in the work that I do. I need to feel like I’m making a difference.  I like the way the not-for-profit sector values the things that matter – family, relationships, people, community, life. I also love seeing communities take the lead on resourcing the things they’re passionate about. There is a sense of ownership that occurs in non-profit work that doesn’t occur in the public or private sector.

My advice to other ethical jobseekers is everything has a season. The community sector often moves in and out of seasons in waves and you need to be able to read the signs and keep up with where things are moving. This may require you to do some more study, re-design your resume and keep up with social trends so you stay fresh and open to discovering new, innovative ways of working. Also don’t be afraid of gently challenging systems that aren’t working. The world doesn’t change by staying the same.