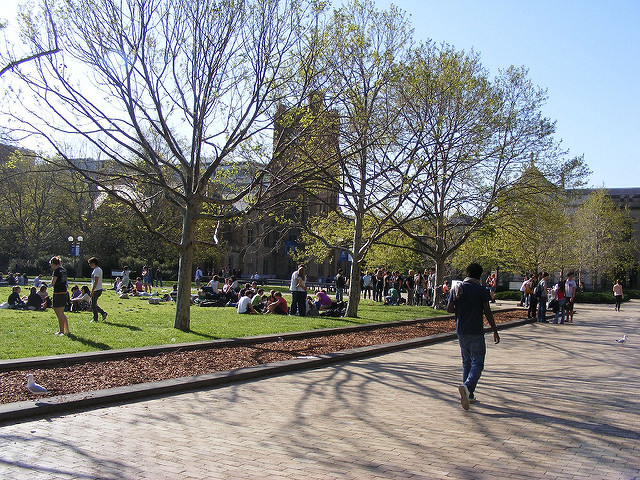 This is a guest post by Andrew Norton from the Grattan Institute and David Carroll of UNSW.

While job growth might improve in coming years, finding employment still won’t be easy. Student numbers are still increasing, which will ensure continued strong competition for graduate jobs. No student can do much about total enrolments or the overall number of jobs. But they can possibly improve their own career prospects.

Does type of university attended affect a graduate’s first job?

One big question is whether which university you attend makes a difference. The MyUniversity website has some specific university information, but most academic research groups similar universities together. This helps take account of factors other than university attended that might affect the results, such as the course taken and the graduate’s personal attributes.

The Australian Graduate Survey (AGS) reports on employment and salary about four months after course completion. The 2014 survey found a salary advantage for graduates of universities in the Group of Eight, which includes the nation’s most research-intensive universities. After taking into account course and gender, the salary premium was around 6% for graduates aged under 25 in their first full-time job.

This advantage halved to about 3% after controlling for average ATAR scores at each university. This result suggests that some, but certainly not all, of the salary premium is due to the prior academic ability of graduates who went to Group of Eight universities.

Interestingly, after controlling again for gender and course studied, the type of university attended did not significantly affect graduates’ probability of having a job within four months of course completion.

Four months out is very soon to judge the impact of a degree. Last year, the Grattan Institute used data from the HILDA survey to look at longer-term outcomes. HILDA is a general social survey, with people of all ages, that also asks its respondents where they went to university.

After statistical controls for various personal attributes, years of work experience and course studied, the Grattan HILDA study found that what type of university a person attended did not make much difference to whether or not a person had a job. This echoes the four months out results.

While employment rates are similar across university groups, the Grattan HILDA study found a lifetime income advantage from attending either a Group of Eight university or a technology university compared to other universities. The advantage was about 6%.

This study did not directly take account of ATAR, but did include social background in its analysis. Other research shows a link between socio-economic status and ATAR.

Why do outcomes differ between universities?

What our research cannot fully explain is why we find earnings differences. Factors other than university attended probably play some part. As the starting salaries analysis suggests, people with relatively high ATARs are likely to have abilities and attributes that would be rewarded in the labour market irrespective of which university they choose.

Although personal attributes are almost certainly important, some universities might be better than others at developing students’ knowledge and skills. This is hard to measure objectively, but universities differ in student-staff ratios and student satisfaction with teaching. Satisfaction information is also available on MyUniversity.

Some universities may do better on other non-academic factors that help students. These include social opportunities with people who may be useful in a future career, work placements while studying, and careers service departments.

Or it could be that, on average, the student experience is fairly similar between universities, but employers believe, rightly or wrongly, that graduates from some universities are better and pay a higher salary accordingly. In other words, employers may take degrees from certain types of university as a signal of ability and talent.

For students seeking a high financial return on their higher education, we should note that course studied is usually more important that the university attended. Given the potential career-long consequences of course choice, what to study is the first question, and where to study it the second question potential students should answer.

Seek lots of information when making a university choice

While the research on graduate outcomes by university type has interesting results, it should only be a very general guide to student choice. It is inevitably backward-looking, when universities are constantly changing and innovating. Future income is only one factor to consider, and not necessarily the most important.

There is no substitute for the usual university search methods: check out their websites, get information on specific institutions from government sources such as the Quality Indicators of Learning and Teaching (QILT) website, go on campus visits, attend open days and ask current students what they think. Your choice of university may have a significant impact on your life, so it is worth gathering the information needed to make a good decision.

This article was originally published on The Conversation. Read the original article.