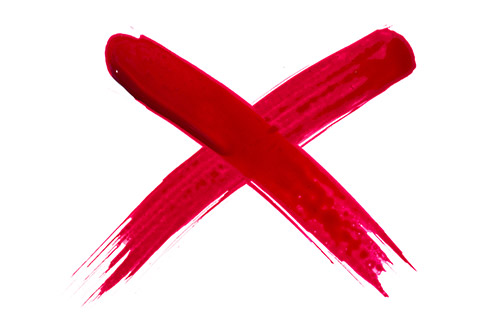 That’s how many CVs Google Senior Vice President of People and Operations Laszlo Bock sifts through with his team each week. So, as you can imagine he’s seen plenty of good, not so good, and just plain bad resumes in his time.

He reckons that more than half of the CVs he sees include at least one of five big mistakes – mistakes that are serious enough to have your application rejected, even if you’re super-smart, super-experienced and you’ve got everything else right.

So while you may think you’ve read every article there is to read on writing a great CV, bear in mind that it may only take one small mistake to have your CV rejected.

Can you afford not to check again?

It’s an oldie that keeps coming back – typos. In fact, according to a survey by popular US job website CareerBuilder a huge 58% of resumes have typos!

Bock says that it’s the serial resume-tweakers that are often most likely to miss a typo.

Typos “often result from going back again and again to fine tune their resumes just one last time. And in doing so, a subject and verb suddenly don’t match up, or a period is left in the wrong place, or a set of dates gets knocked out of alignment.”

The fix he says is simple. Reading your resume top to bottom and then in reverse order can help isolate any problems. And of course, you can’t beat having a friend or colleague proofread it for you.

There’s some debate over just how long- or short – a resume should be so Bock’s rule of thumb is this; one page for each ten years of experience.

As Bock points out:

“…the *sole* purpose of a resume is to get you an interview. That’s it. It’s not to convince a hiring manager to say “yes” to you (that’s what the interview is for) or to tell your life’s story (that’s what a patient spouse is for). Your resume is a tool that gets you to that first interview.”

That means you should only focus on the most important of information, and the information that will pack the biggest punch and will be most likely to impress a potential employer. So, when you’re editing your resume be brutal, get to the point and make it as short as possible – as long as it still conveys all the important information.

When it comes to formatting, Bock has two top tips for job seekers:

To get your formatting right, Bock suggests:

To make sure that the hirer will be able to open and read your file on the other end he also suggests testing your document by opening it in both Google Docs and Word and then opening it as a preview in your email. That way you can make sure that nothing funny happens to your formatting along the way.

Ultimately though, converting to a PDF is your safest option so it will look the same no matter what other variables there may be.

This one is probably slightly more appropriate for corporate jobs where trade secrets are well guarded, but many NFPs do have confidentiality clauses in employer contracts, so it bears mentioning here.

Bock says that if it’s obvious that you’re providing confidential information – like details about clients, funding or partnerships – not only is this disloyal to your previous employer, but it sends up red flags for future employers too.

“In a very rough audit, we found that at least 5-10% of resumes reveal confidential information. Which tells me, as an employer, that I should never hire those candidates … unless I want my own trade secrets emailed to my competitors.”

This one is pretty plain and simple – don’t lie.

Bock lists some of the common lies he sees on resumes including;

“(1) You can easily get busted. The Internet, reference checks, and people who worked at your company in the past can all reveal your fraud. (2) Lies follow you forever. Fib on your resume and 15 years later get a big promotion and are discovered? Fired. And try explaining that in your next interview. (3) Our Moms taught us better. Seriously.”

What do you think of Laszlo Bock’s suggestions? We’d love to hear about them in the comments below!