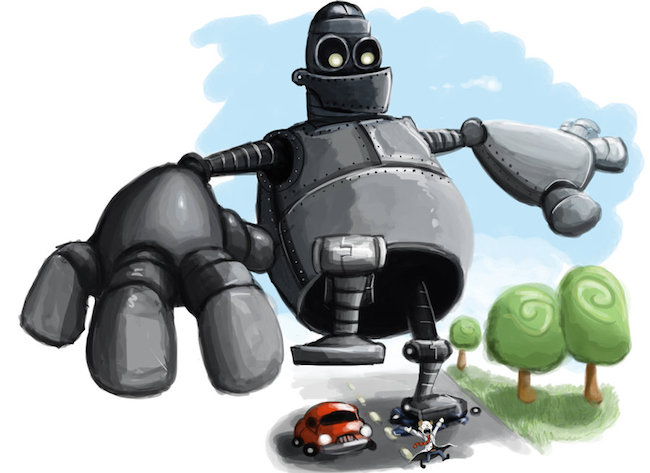 The future isn’t looking good for taxi drivers. If Uber’s arrival on the scene wasn’t bad enough, they’re already looking over their shoulders at Google’s self-driving cars, which are due on our roads by 2019. After that, it’s likely that most taxi drivers in countries like Australia will go the way of lamplighters, milkmen and lectors.

But what about the rest of us? Are our jobs at risk of being stolen by robots too?

Well, according to research from Oxford University, almost half of all jobs could be taken by robots by the year 2035. Half!

The two researchers looked at more than 700 different jobs and analysed how susceptible they are to computerisation. Their prediction: a whopping 47% of the people currently working in occupations we know and love will be replaced by computers, robots or some other kind of machine within the next 20 years.

According to the researchers, jobs that require more simple “perception and manipulation” often in combination with “manual dexterity” are most at risk of being replaced by machines. That’s everything from manual labourers and drivers, through to more “cerebral” work like mathematical or scientific technicians and financial trading.

So what might save you from losing your job to a computer in the next decade or two?

Well, we’re happy to say it’s mostly the sort of skills you’ll need to do many of the ethical jobs on our site, including “originality, negotiation, persuasion, social perceptiveness, and assisting and caring for others”.

That means jobs like mental health workers, social workers, youth workers, nurses, and disability support workers, amongst many others that require “creative intelligence” and “social intelligence”, are the safest.

Interestingly, these are jobs that are currently dominated by women, who currently make up 80 percent of Australia’s community sector. Jobs currently stereotyped as “women’s work” will largely be spared by the march of computerisation and robotics.

That in turn means it will be men who will bear then brunt of the coming robot revolution. Jobs in transportation, manual labour and even real estate – all areas dominated by men – will be hardest hit.

And that’s led to headlines like “Bad News, Men: Robots Are Coming for Your Jobs”.

This could lead to huge social changes and a swapping of the traditional roles of men and women. An article in The Atlantic suggests that:

On a mass scale, this pattern may result in an involuntary shift in the division of labour, with husbands tending to household duties after dropping their wives off at the office. Superficially, that may sound cheery, but the reality will be much grimmer, as families struggle to make ends meet on one income, and men struggle with the emotional upheaval of no longer having a place in the world of work.”

Out of 702 occupations, those judged least likely to be replaced by robot are:

And those most likely to go the way of the dodo:

In the end, of course, your gender will be irrelevant. Robots won’t care whether you’re male or female when they take your job. So whether you’re a man or a woman, choosing an ethical job is likely to be a good idea for decades to come.