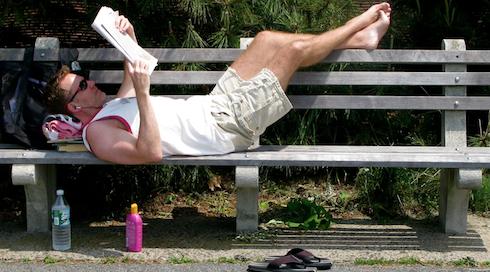 Back in 1930, economist John Maynard Keynes – one of the most influential people of the 20th century – imagined that by the start of the 21st century, people would only work about 15 hours per week to satisfy our needs, and instead use most of our time to focus on “how to use freedom from pressing economic cares”.

How wrong economists can sometimes get it! Instead of Keynes’ imagined future, we find ourselves in reality working longer and longer hours, rather than shorter and shorter ones.

Enter the New Economics Foundation, which has just released a report arguing that to save the world – and to save our lives from becoming unlivable – we need to work less.  And not just a little less – no, the NEF is suggesting cutting the working week to just 21 hours.

We live in a world where many of us – even those in ethical jobs – work long hours, and consume even more than we earn – well beyond the limits of the natural environment.  At the same time, many more struggle with poverty and hunger through unemployment or underemployment.

The NEF argues that “A ‘normal’ working week of 21 hours could help to address a range of urgent, interlinked problems: overwork, unemployment, over-consumption, high carbon emissions, low well-being, entrenched inequalities, and the lack of time to live sustainably, to care for each other, and simply to enjoy life.”

They’re not suggesting that such a reduced week would be mandatory – people should be able to work as much as they want to – but rather that this shorter week should become the new norm, “the standard that is generally expected by government, employers, trade unions, employees, and everyone else.”

Such a change would have “triple bottom-line” benefits, for the economy, people and the environment.  It would create jobs by spreading paid work more evenly across the population, especially more evenly across men and women, at the same time as reducing the social and economic costs of unemployment. It would create time for parents to spend with kids and for people to participate more fully in their families and communities. Finally, it would help break our habit of “living to work, working to earn, and earning to consume”, allowing us to live more sustainably and reduce our impact on the planet.

Given that it would require a wholesale reordering of the entire economy, a 21-hour work week is not about to happen tomorrow.  But like the end of slavery, voting for women, and rights for indigenous Australians, the discussion has to start somewhere.

You can find the full report on the NEF website here.