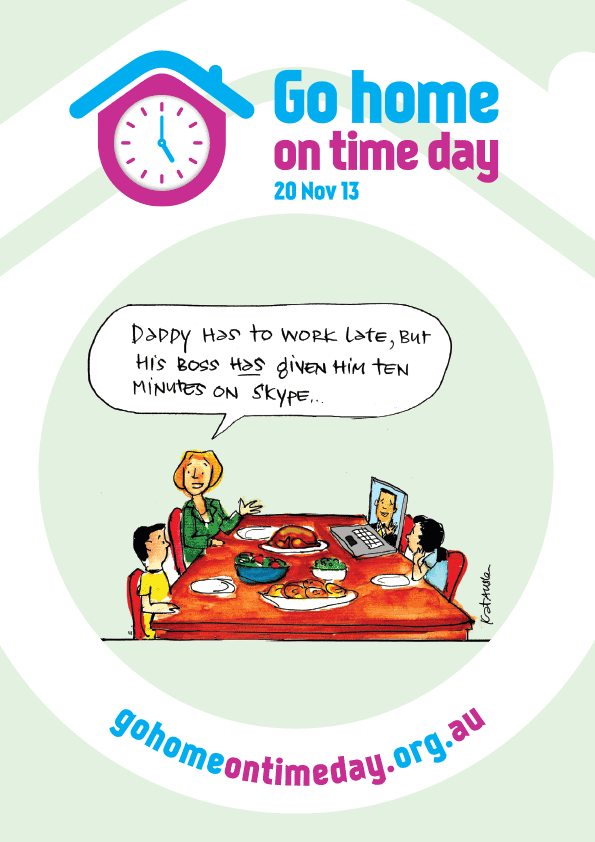 People who are slaves to overtime and those who haven’t got enough work have a problem in common: they’re both anxious and losing sleep.

This is the story according to new research by The Australia Institute and beyondblue, to promote Go Home on Time Day on November 20.

Remember all the talk about work-life balance? Well, according to the research, more than half of Australia’s workers are unhappy with their working hours and an estimated 2.9 million lose sleep because of work stress.

Hard work is probably not worth it; in fact, workaholics may unconsciously be contributing to an unbalanced jobs market. The study authors say their overtime equates to $109.6 billion of unpaid work.

At the same time another group of Australians are stressed and anxious as a result of not having enough work. They are missing out on hours gobbled up by a culture of overtime.

It’s a bit frightening: the risk of depression is on the rise, not just for people who are over-employed, but for those who are under-employed as well.

The study revealed almost 25% of employees who work unpredictable hours felt financial insecurity, over 1-million Australians found involuntary time out of the workforce demoralising, and as a consequence, 20% experienced anxiety.

Is the belief that long hours equates to increased productivity being exposed as a harmful myth?

beyondblue CEO Kate Carnell AO thinks so. She says something is very wrong in Australia’s workplaces because people are working longer and longer hours, but productivity is not increasing to reflect this.

“If you’re ‘under the pump’ consistently, it can lead to sustained job stress which is linked to depression and anxiety. Depression costs Australian businesses $12.3 billion every year through absenteeism, reduced productivity and staff turnover. So business owners need to wake up to the fact that poor work/life balance takes its toll on both their employees and their businesses,” Ms Carnell said.

“When people are expected to work increasingly longer hours, their stress levels rise because often they don’t know what time they can expect to leave work and have little job control. They fear that not working back may put their jobs at risk, but they also face pressure from home when they can’t meet their families’ expectations. In short, their work/life balance suffers and their stress levels skyrocket,” Ms Carnell said.

Rhetoric around flexible workplaces and the advantages of new technology often does not match reality, the Hard to Get a Break? report concluded.

Go Home on Time Day is on Wednesday 20 November. It’s a billed as a great way to recognise that life doesn’t need to revolve around work.