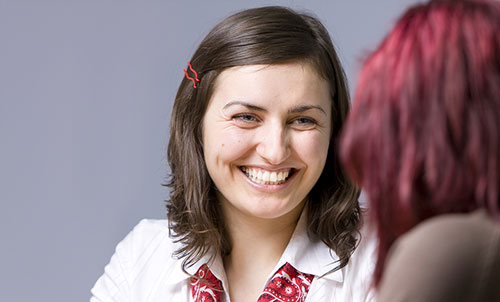 It’s a cliché, but people hire people. In a more perfect world, perhaps you’d be hired based exclusively on your skills, experience and ability to do a job.

But in reality, however good you are as a candidate you’re unlikely to be offered your next job without establishing one thing:

“Rapport” – that is, a good personal connection with the people interviewing you.

This goes beyond just being friendly – although that does help. It’s about making sure your interviewers leave the interview with the feeling that you’re the sort of person they’d like to work with.

So with that in mind, here are five ways you can build rapport in your next job interview, and give yourself the best shot of making it through to the next round:

They say that first impressions last, and the scientific evidence backs this up. Start by greeting your interviewers with a smile, a firm handshake (but not too firm!) and genuine warmth.

Make some small talk: ask how their day has been, what’s going on in the organisation at the moment, or other open-ended questions to encourage conversation. Really listen to the response and show genuine interest in how your interviewer responds.

Prior to the interview, do as much research as you can into the organisation’s work by reading their website, blog or emails. Then you can demonstrate your interest by asking a question about something that’s going on in their organisation. Perhaps they have an upcoming event, new program or piece of interesting news you could ask about?

This interest must be genuine, however. Interviewers will quickly see through attempts to curry favour if you show just a surface level interest in what the organisation is up to.

During the interview, your interviewers will be spending up to an hour (or more) observing you closely. That means that when answering questions, the way you say things can be almost as important as what you say.

Use the way you sit and your body language to show that you’re engaged with the interviewers. You can do this in a number of ways:

Where possible, try subtly mirroring your interviewer’s body language. It shouldn’t be obvious you’re trying to copy them, but according to Wikipedia:

Mirroring can establish rapport with the individual who is being mirrored . . . [and] allow the individual to feel more connected with the person exhibiting the mirrored behavior. As the two individuals in the situation display similar nonverbal gestures, they may believe that they share similar attitudes and ideas as well. Mirror neurons react to and cause these movements, allowing the individuals to feel a greater sense of engagement and belonging within the situation.

But be careful not to mirror disinterested or distant body language – that can have the opposite effect!

Click here to read the second part of this blog post, and our final three ways to build rapport in your next job interview.